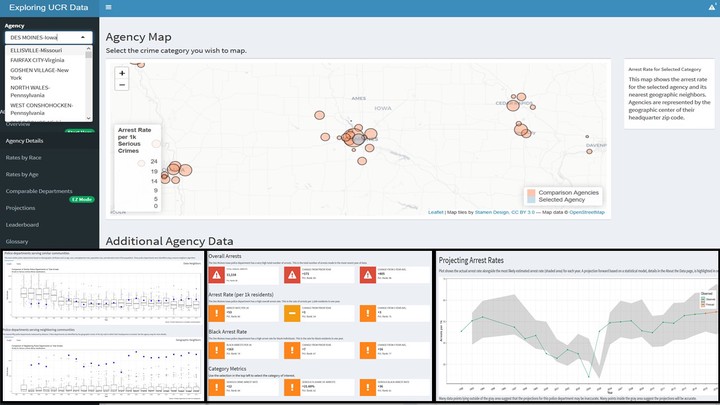 Learn About Policing in Your Community

Visit the Arrest Data Explorer prototype today and learn about the patterns of arrests by police departments in your community.

Try the prototype out today! And, if you have feedback on what you would like to see in such a tool, please get in touch.

Follow us on social media to stay updated on this project.

Despite the recent uptick in national political activism, local civic participation and trust in government is in decline in the US today (Putnam 2000; Skocpol 2003; Ryzin 2011). One contributing factor is that the government is more responsive to technical experts than to members of the public. The public recognizes this and feels little chance of being heard on important policy issues (Fischer 2009). While technical expertise is needed to remedy the challenges that we ask government to solve (e.g., clean water, safe streets, quality schools), the diminished voice of the public poses a threat because technical experts do not represent everyone’s values and priorities. As Virginia Eubanks writes, there is a difference between arguing on behalf of the poor and arguing from the position of being poor (2018). This is one of the fundamental tensions of democracy today: how can government be accountable to the public it serves while harnessing expertise to achieve its goals (Behn 2001)?

The answer is a participatory form of democratic accountability that places technical expertise in the service of stakeholders. The need for such an approach is urgent in policing. Police departments rely on complex data analytics and surveillance systems to conduct their work. The public has little access to these data or analytics and, as a result, is left to advocate with anecdotes and value statements to which policymakers are less receptive. Existing tools to help the public understand police activity represent the goals of their creators — such as profit, cost control and efficiency, or a one-time special report. In most cases, the data and methods are kept secret, verified by no outside entity. Evidence-based public deliberation around these issues is thus reduced to selecting among policy positions crafted by well-resourced organizations with no accountability, review, or auditing of the data or methods used. By denying the public an active role in asking questions and gathering evidence, an impoverished and unappealing form of civic participation emerges — discouraging the public from lending a voice at all.

A more democratic approach would be a co-created public infrastructure that supports participant-led inquiry into government performance. For any policy area, the first component of this approach is an open-source, auditable collection of data and analytics accessible to all stakeholders including community members, government agencies, journalists, and researchers. On top of these data, audience-specific tools should be constructed to allow users to pose their own questions and construct their own analytics. We know that the public, when motivated and perceiving a chance to be heard, can mobilize technically sophisticated tools of argumentation (Epstein 1996).

Such tools do not exist yet because their creation requires a new design process that places a diverse group of stakeholders, and not the data scientist, at the center. As a first step in this conversation with stakeholders, I have built a prototype to interactively explore police arrest data across the United States. I invite you to explore it today: https://jknowles.shinyapps.io/arrest_prototype/

Its purpose is to begin a design conversation with stakeholders by demonstrating what is possible and inviting them to imagine what could be. The prototype does not target any particular audience, but instead surveys the many possiblities for exploring police data and measuring police activity that stakeholders may find useful.

Building a prototype is only the first step. The next steps include:

The result will be a model for modern civic discourse; empirically grounded, representative of the public’s values, and available to anyone to review, revise, or rebut. This approach can then be applied to other public services like fire protection, healthcare, and environmental conservation. For Civilytics, policing is the first step.

I am looking for partners to join Civilytics in this exciting and important work. Contact me with inquiries about the prototype, the roadmap, partnership opportunities or to discuss the intersection of expertise and democracy. If this is you, please get in touch.