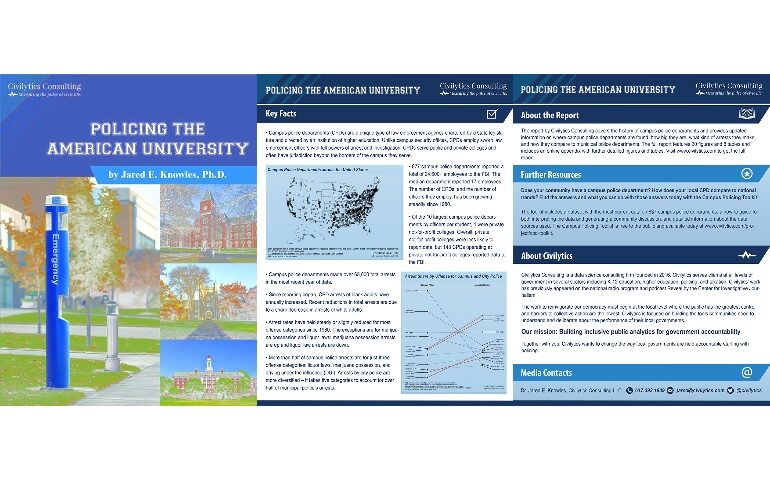 Most campus police departments have jurisdiction beyond the boundaries of the campuses they serve – giving officers the authority to police adjacent housing, public spaces, and roads. Where do members of the public turn to get information on campus police activity? To file grievances? And who is responsible when the actions police take violate the values and norms of the community they serve?

The truth is that reliable public information about police forces in the United States is limited, but, by looking at the measures we do have comprehensively – across time and colleges, by student population, and in contrast to city police – we can better understand law enforcement on college campuses.

Highlights from the report include:

The full report features 20 figures and 8 tables and includes an online appendix with further detailed figures and tables.

The report is published by Civilytics Consulting, a data science consulting firm in Boston that seeks to improve the public’s access to information necessary to gain a voice in public policy deliberations. Civilytics’ work has previously appeared on the national radio program and podcast Reveal from the Center for Investigative Journalism.

In addition to the report, Civilytics has created a Campus Policing Toolkit. This toolkit is intended for communities interested in learning more about their local campus police department. The toolkit includes a dataset with the most current data on 837 campus police departments, a how-to guide for both interpreting the data and generating a community discussion, and detailed information about the data sources used. The Campus Policing Toolkit is free to the public and available today.

For more resources including data on individual campus police departments and a how-to guide for using data to inform discussions in your community about policing, check out the Campus Policing Toolkit. The toolkit includes:

Get more tables and charts in the online appendix.