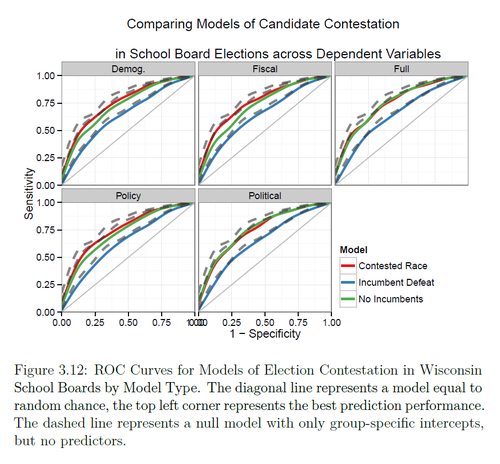 In the United States there are over 13,000 independent school districts governed by school boards consisting of three to nine elected representatives from their community. They decide on curriculum, school construction and closures, staff compensation and for spending hundreds of billions of dollars annually. This dissertation seeks to explore the degree of democratic control communities exercise over school boards through elections. The perception is that voters and candidates do not participate in school board elections. This perception runs counter to the democratic promise of school boards as local offices. School board membership, often by design, is among the easiest office for a potential candidate to secure in terms of votes needed to win, campaign costs, and lack of political party gatekeepers. I look at four aspects of school board elections to assess whether or not school boards do fulfill their promise of democratic control over local schools. First, what community conditions are related to the emergence of school board candidates? Next, what factors determine changes in the level of voter turnout for school board elections? Third, do voters and candidates change their behavior in response to exogenous political forces? Fourth, does incumbent defeat lead to measurable changes in school district outcomes? To examine this I construct a new dataset around a panel of election records from over 300 Wisconsin school districts spanning the 2002-2012 elections. I combine these election results with administrative records on the demographics, finances, community partisanship, policy decisions, and academic performance of school districts to explore the relationship between these conditions and election behavior through multilevel modeling. Wisconsin is selected because of the introduction of a reform that gave boards unanticipated freedom in setting employee compensation and work rules, which provides an exogenous shock to the information available to board members, voters, and potential candidates about the preferences of their community for public education and the role of school boards. Despite the greater accessibility of school board office, on average, participation by both candidates and voters in board elections remains low and responded only weakly to a large external policy shock.

School Board Elections and Democracy

In doing so I specifically ask:

To best summarize my results, the conclusion of my dissertation states:

Where does this leave us? A stylized summary of the state of school board elections over the period of study in Wisconsin may best be described as:

I characterize this as evidence of the unfulfilled democratic potential of school boards. These facts, in most communities, are trivially easy to change. Individual citizens can, and do, file to run for office and wage a successful campaign with no campaign donations and few volunteers. The small scale of most school districts in Wisconsin suggests that relatively few meaningful barriers exist to running for and winning a school board seat relative to almost any other elected office in the state. However, despite this great potential, the actual uptake remains low. More work is needed to study why, but previous studies have suggested that the constrained nature of school board authority, long hours, and low prestige may prevent this potential from being realized…

Voters, with little media coverage of school boards or the school board campaign, have relatively few avenues of acquiring the information necessary to cast a meaningful ballot and largely choose to simply opt out and implicitly endorse the status quo. It is hard to imagine an event within the current organization of school boards that could better provoke the public to care about school board elections than the events in Wisconsin from 2010-2012, and yet the impact on participation was negligible. This lack of mutability in participation is troubling evidence against the likelihood of fulfillment of the democratic potential of school boards.

If you are interested in learning more, you can read my dissertation abstract.

Or, get the full text right here.